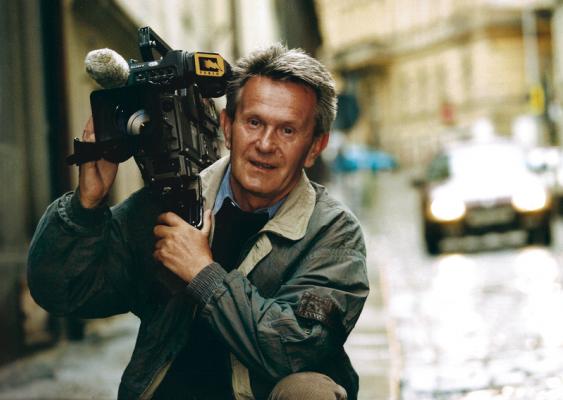 Jan Špáta was born in 1932 in Náchod. He spent his childhood in Hronov where he was to take over the family paper business. However, the business was nationalized in 1948. Špáta went to Prague, graduated from the School of Graphic Design(1952) and from the Department of Documentary Film at the Academy of Performing Arts in Prague (FAMU) in 1957. He worked as cameraman in the news studio Zpravodajský film. He was deeply influenced by his cooperation with Evald Schorm, discovering his personal existential themes (To Live One’s Life/Žít svůj život, Why/Proč, Reflection/Zrcadlení...). In the mid 1960s, he started his directing career, receiving over sixty awards at both Czechoslovak and international festivals. He also worked as cameraman with other directors ((Pavel Hobl, Václav Táborský, Jiří Papoušek, Bruno Šefranka, Helena Třeštíková, Drahomíra Vihanová, Andrea Majstorovičová and primarily his second wife Olga Sommerová). He influenced several generations of Czechoslovak documentary filmmakers (Pavel Koutecký, Milan Maryška, Jana Hádková, Andrea Majstorovičová, Martin Štoll, Ivan Zachariáš…), representing the “Špáta school” in the context of Czech film. In 1967, he was teaching at the Hochschule für Gestaltung in Ulm (Germany), in 1992-2006 he worked as lecturer at Prague’s FAMU, in 1996 he became an associate professor, in 2002 he became a professor. Besides making more than 100 creative films, he is also author of a book interview with M. Štoll Moments of Joy/ Okamžiky radosti and a book of essays Between Light and Darkness/ Mezi světlem a tmou. He died in Prague in 2006.
Špáta conceived film as service, public education and therapy. He was seeking the “good man who still lives”, approaching the viewers by means of emotions. It was his emotionality and positivism that brought him both praise and criticism, representing his main contribution to the Czech documentary. He was a master of the snapshot and concise film language based on dynamic musical contrast. Among the main themes of his films were the finality of life (Respice finem, Poslední dějství, Srdce na dlani), faith (Konec světa, Evangelíci ze Železných hor), relationships and positive thinking (Hlavně hodně zdraví, Parta, Kreutzerova sonáta). Also unique are his travelogue films (Country of St. Patrick/Země svatého Patrika, Lidé z hor, Japonsko, má láska, Athletic Variations/Atletické variace, 777 vteřin v Československu), films on music (Variations on Gustav Mahler’s Theme/Variace na téma Gustava Mahlera, Zmatený poutník) and the portraits for the GEN and GENUS documentary cycles (Miroslav Horníček, Vlastimil Brodský, Jiřina Bohdalová, Jiří Bělohlávek, Karel Kachyňa, Ljuba Hermanová and others).